Waste Recycling: An Opportunity for Refiners? 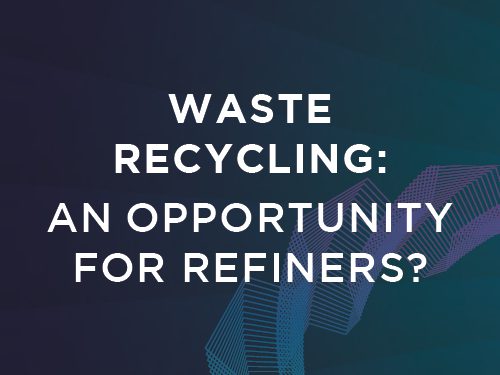 The Circular Economy has been established as the number one priority in the European Green Deal and innovative recycling technologies are helping refiners to apply the concept to downstream. Our new blog post explores the implications of the circular economy for refiners and the opportunities that waste recycling technologies offer, including the potential of chemical recycling.

The Circular Economy and the Implications for Refiners

In late 2019, the European Commission presented the European Green Deal and established the Circular Economy as ‘the number one priority’. Each year 25m tonnes of plastic waste is generated in Europe and over 70% of this is not recycled. Huge amounts of waste, both in Europe and globally, end up in natural environments, harming wildlife and biodiversity, with as much as 80% of marine debris being plastic. A circular economy aims to have minimal or no waste and innovative recycling technologies are helping to apply this concept to the refining sector.

A circular economy can contribute to protecting the environment by introducing new methods of waste-plastic processing which will lead to a decreased volume of plastic waste and decreased emissions, which are caused by burning it. In downstream, waste recycling technologies are becoming increasingly advanced and are providing refiners with sustainable feedstock whilst reducing their reliance on fossil fuels.

Navigating the current context is not plain sailing for refiners. They are facing tighter margins due to a declining transportation fuel market and new regulations, such as IMO which came into effect in January this year. As a consequence, downstream oil and gas players are looking for ways to reduce costs and margins to remain competitive.

Many of the globe’s refiners have noted that to increase their margins in the transition, they must increase the use of alternative feedstock and shift towards greater petrochemical production. With this move, a growing number of refiners are turning to waste recycling technologies to provide sustainable feedstock whilst reducing their reliance on the exploration and production of fossil fuels.

The consultancy McKinsey also highlighted this opportunity, stating that there is the prospect to ‘build a new and profitable branch of the industry based on recycled plastics’ and have suggested that this could represent a profit pool of nearly €50 billion per year, worldwide by 2030.

In a similar vein, Paul Hodges, Chairman of International EChem, a chemicals industry consultancy, urges refiners to embrace recycling technologies and get a foothold in the petrochemical market. Hodges highlighted the importance of low-cost US ethylene feedstock for European refiners, arguing that European producers will be placed at a disadvantage if they did not make the jump, and thus should accelerate moves to use recycled feedstock in their systems.

Many refiners have already invested large sums of money into upgrading and integrating their operations and new waste recycling technologies are becoming increasingly pioneered and implemented. The term ‘waste’ includes consumer plastic waste but also by-products from the refining process, including oils, sulphur and hydrocarbon gases, all of which are being used across Europe for energy production or as a feedstock.

One form of recycling is chemical recycling, which converts waste plastics into valuable chemicals. Waste plastic can be liquefied in a thermochemical liquefaction process, which turns it into a material similar to crude oil and provides refineries with a raw material to reuse, as part of a circular process.

Drawbacks of chemical recycling are that it can be expensive and that it requires large amounts of plastic to be commercially viable. As a result of the economic cost and complexity of the processes involved, R&D is quite nascent and there are not many examples of chemical recycling technologies in refineries that are being used for commercial-scale production at this moment.

Further, due to a lack of widespread understanding of the environmental and economic impacts of the technologies, there is an absence of legislation and regulation. This is important for chemical recycling to become more widespread and to help to define the output material and distinguish that from energy recovery.

Overall, the future for chemical waste recycling technologies in downstream is promising. Several pilot plants have been developed across Europe which are pioneering new processes to recycle waste, with some having recently been successfully implemented. One notable example is OMV’s ReOil Plant at their Schwechat Refinery (see list below for more information on this project and others which are showing encouraging results). 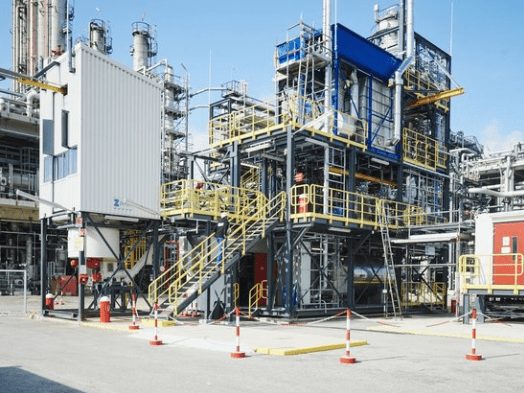 Getting crude oil back out of plastic

It is important that refiners address the topics of recycling, waste, and petrochemicals. They require alternative feedstock sources to sustainably support future demand and the petrochemicals market is increasingly shaped by end-consumers who are making more environmentally conscious decisions compared to previous generations.

Waste recycling technologies will be vital in this transition as refiners produce and utilise alternative feedstock allowing for molecules to be reinvested into the value chain. For the future of refining, this will have a positive impact, resulting in reduced natural resource consumption and aligning with the EU’s sustainable narrative.

Recycling technologies and circular economy projects to watch out for

ChemCycling by BASF & Quantafuel. The technology replaces fossil resources used for chemical production with recycled material from plastic waste. Plastic waste is transformed into feedstock or monomers, e.g. by using thermochemical processes, hydrolysis or solvolysis. The feedstock can be used in the production of new plastics.

Plastic conversion system by Renewlogy. This technology uses a catalyst to degrade long carbon chains. Of the resulting shorter chains, 10 to 25% become hydrocarbon gas that Renewlogy uses to heat the system; 5% turn into char; 70%-plus of the shorter chains become feedstock for diesel fuel, virgin plastic, and other petrochemical products.

Cat-HTR (Catalytic Hydrothermal Reactor) by Licella Holdings. The Cat-HTR technology utilises water in the supercritical state; breaking down the polymeric structure of the plastic feedstock and harvesting hydrogen from the water for use in the creation of new, stable hydrocarbons.

ReOil by OMV. At the start of 2018, OMV began operating their ReOil plant which produces as much as 100 kg/hr of synthetic crude from waste plastic for reuse in the refinery. The product can be used as fuel or plastic feedstock and amounts to around 100 litres of valuable crude is secured from 100 kilograms of waste.

Unipetrol plan to build a pyrolytic unit for waste-plastic processing at their plant in Litvínov and implement standard production in the next three years.  The technology will be scaled on the basis of Pyrolysis, or thermal decomposition of materials at elevated temperatures. Unipetrol maintain that this represents the most interesting waste-plastic processing technology, as it provides a high utilisation ratio of liquid products that can subsequently be additionally processed using petrochemical or, alternatively, refinery technologies. Tomáš Herink, board member of the Unipetrol Group, described the project’s objective as ‘successfully develop[ing] a functional technology for reusing waste plastic and rubber from waste tyres in the petrochemical industry, which will result in more effective utilisation of existing plastic waste and in lowering the carbon footprint’.

Axens are currently working with partners to process renewably-sourced aromatics to successfully recover high-purity bio-based paraxylene. The technology has the potential to help develop cost-competitive renewable chemicals and fuels from non-food biomass. Pierre Beccat, Executive Vice President Technology Development & Innovation, noted that ‘Today, the energy and chemical industries must be responsive and proactive in adapting their assets and operations to contribute to a sustainable future’. Beccat described how the project will ‘complete effectively our processes portfolio to transform biomass into fuel or chemicals’.

Total’s Osilub Plant. Total have established the Osilub plant which recycles used oil to be used as a feedstock by refineries to produce fuel or lubricants. Since it’s opening in 2012 the plant has recycled 120,000 metric tons of used oil annually, equivalent to half of France’s total output. 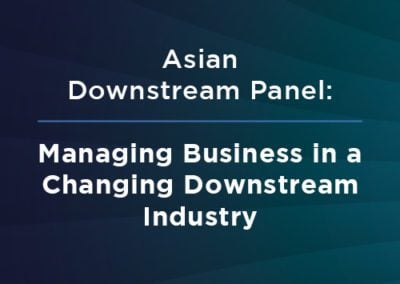 The pandemic has overturned the way we do business. Now, as lockdowns ease, business leaders are navigating the new challenges of the next normal. END_OF_DOCUMENT_TOKEN_TO_BE_REPLACED 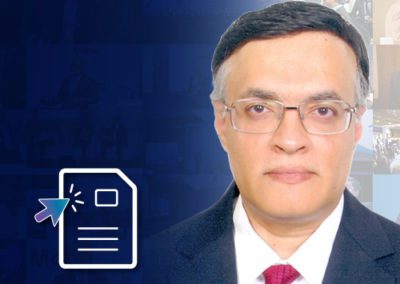 Watch the recording of this webinar with Dr Pratap, CEO at Ingenero, who shares his insights on staying ahead in a competitive and hyper-connected market. END_OF_DOCUMENT_TOKEN_TO_BE_REPLACED 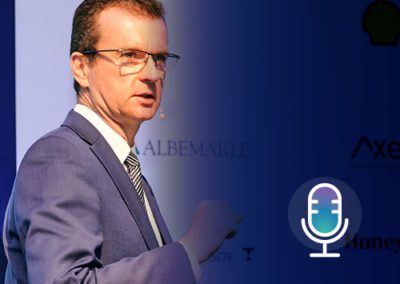 We recently had a conversation with Alan Gelder, VP Refining, Chemicals & Oil Markets at Wood Mackenzie. We explored the impact of the COVID-19 outbreak on demand with some nifty slides to hand. Watch now. END_OF_DOCUMENT_TOKEN_TO_BE_REPLACED

When Ross O'Brien won the ERTC Rising Stars Awards 2018 in Cannes, he was a Mechanical Engineer at BP. We recently had a catch-up with him to learn more about his new role as Executive Assistant, Executive Office HR at BP, his career, and his thoughts on future technologies in Refining. END_OF_DOCUMENT_TOKEN_TO_BE_REPLACED